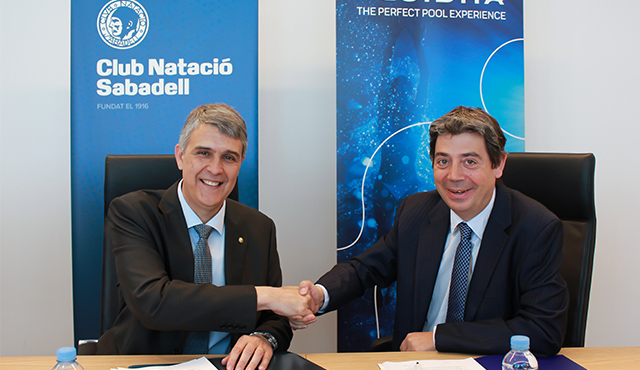 Fluidra’s Executive  Chairman, Eloi Planes, and the President of Club Natació Sabadell, Claudi Martí, have agreed that the company, which is a global leader in the pool and wellness equipment business, will be the club’s official sponsor for a further three years under its AstralPool brand.

Both the first men´s and women’s Water Polo teams at CN Sabadell will continue to be called “AstralPool CN Sabadell” until at least 2021. The club that built the first freshwater swimming pool in Spain and that has held major sports competitions such as the Final Four in the Women's European Water Polo Cup in 2011, 2013, 2016 and 2019. It also hosted the second leg of the men’s Water Polo 2012 LEN Champions League in 2012.

During the meeting, Planes expressed his satisfaction at being able to extend Fluidra’s “close partnership” of 13 years with the club, in view of the many values that “we have in common” such as teamwork, passion for success and striving for excellence.

“We are proud that a world leader wishes to continue to support our Water Polo teams”, said Martí, who added that this agreement gives a welcome additional boost so that the historic club can hit the targets set for the coming seasons.

A very special surprise were the e-scooters that Eloi Planes gave to all of the members of the women’s team to make good on his promise if they won the Europe championships for the fifth time.

Apart from being one of the sports clubs in Catalonia with the most members, CN Sabadell has one of the best women’s Water Polo teams in history, which has dominated Spain’s Honor Division since 2008, as well as Europe’s top competitions. Its latest achievements include winning nine Super Cups in Spain, five European Cups, three European Super Cups and sixteen league titles.