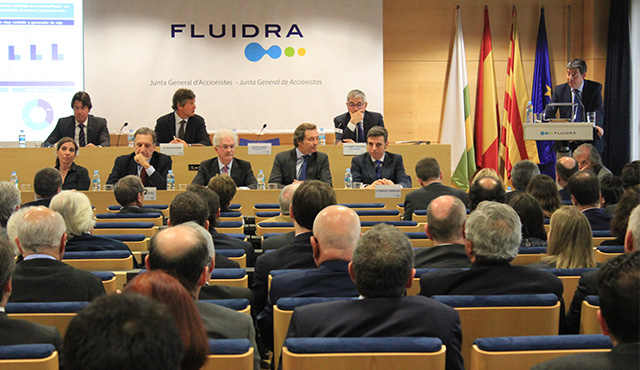 Fluidra, the listed Spanish multinational group devoted to the development of applications for the sustainable use of water for Pools & Wellness, approved its Financial Statements and Directors’ Report at its AGM. The shareholders gave their backing to the results obtained by both the Company and its consolidated group of companies for the year ended at 31 December 2017, following their audit by Ernst & Young. The shareholders also passed the rest of the items on the agenda.

The AGM made a positive appraisal of the financial and operating results obtained in the last business year (ended at 31 December 2017). Fluidra reported a significant increase of 9.6% in sales and set a new record of 781.4 million euros. Adjusted for non-recurring costs, EBITDA stood at 105.3 million euros after having increased by 22.4%. As a result, net profit was 35.6 million euros, up 47.7% on the previous year. This meant that Fluidra not only hit the targets set in its 2018 Strategic Plan one and a half years ahead of time, but also by far exceeded them.

Amongst other items, Fluidra’s AGM also gave the go-ahead to the remunerations policy and the incentive plan based on shares, which now take the new size of the company into account in view of the imminent close of the merger with Zodiac.

As a strategic measure related to this operation, Fluidra has decided to make an exception of not distributing dividends this year. However, it anticipates resuming its payouts to shareholders in 2019, when it has reduced the company’s leverage.

Eloi Planes, Fluidra’s executive president, gave a breakdown of the operations conducted over 2017 in which he focused on the merger with Zodiac, which will turn Fluidra into a new world leader in the pool sector. The operation received approval at an EGM earlier this year on 20 February. Planes also highlighted milestones such as the acquisition of Piscine Laghetto, the Italian brand of top-of-the-range above-ground pools, and Riiot Labs, a specialist in connectivity, as well as the sale of ATH.